"First rate film on Asian immigrants and their contributions..."

"The history and culture of the Asian people in the US is revealed through personal interviews. Recommended."

Home from the Eastern Sea 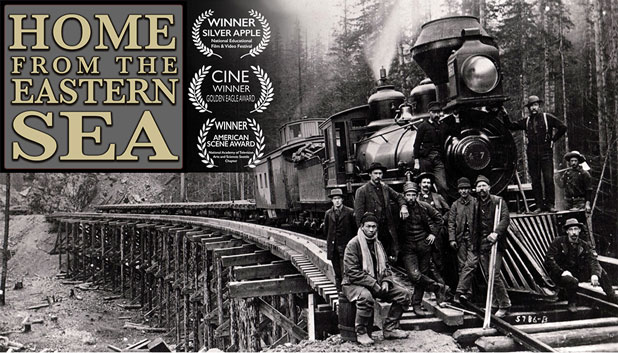 This award-winning documentary tells the story of the immigration of Chinese, Japanese, and Filipinos to America. The documentary explores the history of each nationality through the personal stories of representative families.

The film begins with the story of the Yee family of Seattle, which represents four generations of Chinese Americans in the United States. Their roots go back to the building of the transcontinental railway and the Chinese Exclusion Act of 1882. The Hondas of Spokane are a lively testament to the resilience of Japanese Americans. Having suffered discrimination during the war, they display a strength of character engendered by their wartime experiences. Lorena Silva lives in a close-knit Filipino American community in Wapato, where extended family ties give support.

Intercut with family stories and rare archival footage and drawings are the observations of scholars, community activists, and writers providing the perspective of history and culture. They include University of Washington professors Shawn Wong, Gail Nomura, Steve Sumida, and Filipino American National Historical Society Executive Director Dorothy Cordova.  The documentary also includes dramatic readings of the works of writers Carlos Bulosan and Shizue Iwatsuki. Also profiled are Norio Wakamatsu of Seattle who talks about his experiences being taken from Seattle to the Minidoka concentration camp as well as Gordon Hirabayashi who challenged the constitutionality of the incarceration of Japanese Americans during WWII.

Home from the Eastern Sea was awarded the American Scene Award by the National Academy of Television Arts and Sciences Seattle Chapter. It was also nominated for “Outstanding Documentary Historical/Biography” by the same organization.

Narrated by James Shigeta, Home From the Eastern Sea was written and co-produced by Elizabeth Clark Stern and filmed and edited by Emiko Omori.