"This delightful short documentary is an inspiration to everyone."

The Woman Behind the Symbol 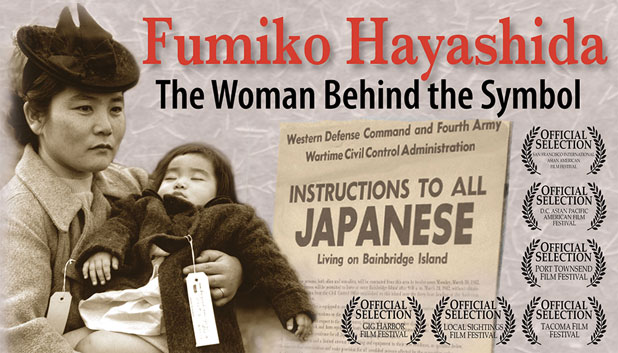 “Every individual forcibly removed from his or her home in 1942, simply on the basis of wartime racial calculation, became the protagonist of a tragic story. This one, featuring Fumiko Hayashida and the Bainbridge Island Japanese American community is especially poignant and deserves our attention.”

In February 1942, two months after the bombing of Pearl Harbor, the U.S. government issued Executive Order 9066 authorizing the relocation of 120,000 people of Japanese ancestry living on the West Coast in order to incarcerate them in isolated and desolate concentration camps. The government’s justification was to protect the country against espionage and sabotage by Japanese Americans.

Exclusion Order No. 1, authorizing the first relocation, targeted the Japanese Americans living on Bainbridge Island, Washington. One of them was 31-year-old Fumiko Hayashida, a pregnant mother of two. She was one of 227 members of her community who, dressed in their best clothes, assembled at the Eagledale ferry landing on March 30th, 1942. As they waited to be taken off the Island by armed military escorts, Fumiko, holding her 13 month old daughter Natalie Kayo, was photographed by a Seattle Post-Intelligencer photographer. The photograph has since become a lasting iconic symbol of the internment experience.

FUMIKO HAYASHIDA: THE WOMAN BEHIND THE SYMBOL is both a historical portrait of Fumiko, her family and the Bainbridge Island Japanese American community in the decades before World War II as well as a contemporary story which follows 97-year old Fumiko and her daughter Natalie as they return to the site of the former Minidoka concentration camp, their first trip back together in 63 years. The film reveals how the iconic photograph became the impetus for Fumiko to publicly lobby against the injustices of the past.