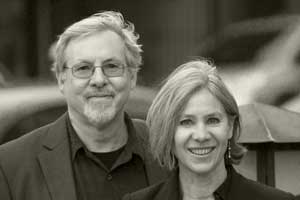 Stourwater Pictures is an award-winning production company that specializes in meticulously crafted historical and social issue documentary films. We find the essential narratives buried within our subjects—and produce accurate, absorbing, and entertaining films that best honor and reflect their most important themes.

We focus on discovering and telling the stories of everyday people who have lived extraordinary and meaningful lives. With an emphasis on social justice, our award-winning films have screened in scores of festivals and universities and have been broadcast nationally on PBS as well as internationally.

Don’s study of biology at Cornell had led him to Stanford to focus on making scientific films. His early work includes cinematography and editing for the PBS series Frontline, as well as shooting for many other nationally broadcast television documentary series. He also taught documentary film production at both Stanford and Colorado College. Lucy’s portfolio of films as a producer and director began with accolades for her work with her Masters’ thesis from Stanford University, Witness to Revolution: The Story of Anna Louise Strong. In producing the film, she became the first American student to work with the China Film Co–Production Corporation. The film received a national PBS broadcast, and won a Student Academy Award, the Nissan Focus Award and a CINE Golden Eagle. In 2012 their feature documentary The Revolutionary premiered at the Seattle International Film Festival to sold-out crowds. It screened theatrically in NYC and was shown at the National Press Club, the European Parliament, the Foreign Correspondents Clubs in Beijing, Shanghai and Hong Kong as well as numerous universities around the country and was awarded a CINE Golden Eagle.

In 2014, Lucy and Don received the prestigious Erik Barnouw Award from the Organization of American Historians and the History In Progress Award from the American Association for State and Local History for Honor & Sacrifice: The Roy Matsumoto Story. Their film Proof of Loyalty: Kazuo Yamane and the Nisei Soldiers of Hawaii won the Audience Choice Award, Documentary at the 2017 Asian American International Film Festival and was awarded the Legacy Award at the 2018 DisOrient Asian American Film Festival. It has been shown at numerous film festivals and has been broadcast nationally on PBS. Their most recent film, Honor Thy Mother, was completed in the spring of 2021 and is currently being submitted to film festivals.