"Proof of Loyalty, the story of elite translator Kazuo Yamane, is a superb lens to view the WWII contribution of Japanese American soldiers from Hawaii. Through stunning, little-known footage and precise narration, Proof of Loyalty captures the sad irony that those we discriminate against may be among our most able, tireless, and faithful. A meticulous, powerful, and all too timely film."

"Proof of Loyalty is a powerful documentary of the vital World War II role of the Nisei soldiers of Hawaii in winning the war in the Pacific and in Europe and in doing so establishing the unquestioned loyalty of Japanese Americans which then empowered this ethnic group to transform and democratize Hawaii in the postwar era.  While providing the overall history of Japanese Americans in prewar Hawaii and intertwining the story of other Nisei soldiers, the voice and remarkable experiences of Kazuo Yamane are at the center of this film. Because of his unique linguistic and military knowledge gained from studying in prewar Japan he was able to identify and translate critical information from captured Japanese documents that guided the U.S. strategic bombing campaign against Japanese military industrial targets, proving the value and loyalty of a discriminated racialized minority whose government ultimately entrusted with vital national security tasks. It is a timely message of the power of diversity."

"How far would we be willing to go to demonstrate loyalty to this country, even if our own families faced discrimination - & we had too? The little known story of Kazuo Yamane conveys how one man’s actions & belief in his country were significant in turning the tide of World War II. More than that, it depicts how those least trusted during the war - because they looked like the enemy - became invaluable to our war effort. The rich archival images, context given by historians and veterans, and the haunting music complement this vivid story highlighting Kazuo Yamane but also telling of Japanese Americans’ critical contributions during World War II. More than anything, these events from the past should make us ponder how we address race and ancestry today." 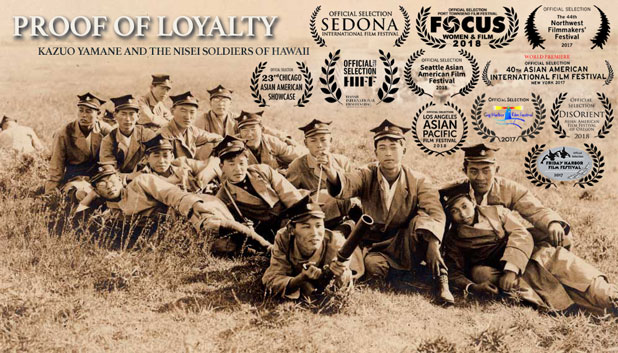 We’re pleased to announce that Proof of Loyalty had its world premiere at the Asia Society in NYC on August 3rd as part of the Asian American International Film Festival where it won the Audience Choice Award, Documentary. You can read more on PROOF OF LOYALTY’s own website that includes news, screenings, reviews, and history. You can see it by clicking here.

“Brilliantly mixing archival footage and intelligent interviews, Lucy Ostrander and Don Sellers tell the story of Kazuo Yamane and his fellow Japanese Americans who proved their patriotism through their military exploits amid the most trying circumstances during World War II.”

– Greg Robinson, author,
By Order of the President:

FDR and the Internment of Japanese Americans

“…you will exit the theater with a greater understanding of Hawai‘i’s history and an appreciation for the depth of service the young Nisei stepped up to perform when the odds were against them.“

PROOF OF LOYALTY: Kazuo Yamane and the Nisei Soldiers of Hawaii tells the story of a Japanese American who played a crucial strategic role in World War II. He and his fellow Nisei from Hawaii combatted prejudice and discrimination to loyally serve their country. Their extraordinary service, mostly untold, ultimately changed the course of U.S. history.

Kazuo Yamane’s father, Uichi, came to Hawaii in the late 19th century with nothing and built a successful family business. His eldest son, Kazuo, first educated in the discriminatory school system in Hawaii, eventually graduated from Waseda University, the Harvard of Japan, and returned to Hawaii just before the Pearl Harbor attack. Drafted just before the war he became part of what would be the War Department’s most successful social experiment, taking Nisei troops from Hawaii and forming the 100th Infantry Battalion, a unit made up of a group entirely related to a country we were at war with. Their success was spectacular, but Kazuo was plucked from their ranks for his exceptional knowledge of Japanese, which would lead him to the Pentagon, to a secret facility in northern Maryland, and finally to serving under Eisenhower in Europe. Most importantly, he would identify a secret document which would help to shorten the war in the Pacific.

The absolute loyalty of the Nisei to America in World War II, despite discrimination and incarceration provides an insight for us today. These American citizens used whatever skills they had to protect their beloved country, even while many Americans suspected them of being the enemy. The War Department trusted them and through them gained both a military advantage by strength and sacrifice on the battlefield to important intelligence behind the lines. Diversity powers America, but also keeps us safe — one only has to look at the Nisei to provide ample proof.

The story of Japanese-Americans in Hawaii is a unique one, and as with any unique story, it is difficult to tell in a way that is both comprehensive and personal. But PROOF OF LOYALTY manages to do just that, using the inspiring story of World War II hero Kazuo Yamane as a window into the Japanese-American experience in Hawaii.

These men proved not only to be loyal, but also instrumental to winning the war.

Men like Kazuo Yamane are a reminder of what truly makes America great. Japanese-Americans had no obligation to love the United States during World War II. The discrimination they faced is a stain on American history, revealing the darkest, ugliest impulses of American society. Yet the brave Japanese-American soldiers we see in PROOF OF LOYALTY risked everything for their country and ended up saving countless lives through their translation work. They prove that America’s strength comes not from military might, but from diversity. This film may be about men from decades past, but it couldn’t be more relevant.