Honor Thy Mother, a 31-minute documentary short, was completed in the spring of 2021 and is currently being submitted to film festivals. The film is now available for sale to academic and non-profit organizations, libraries and individuals. Just click the 'Order' link above.

"Honor Thy Mother brings together a remarkable tale of the violences of cultural erasure and the endurance of collective memory from the voices of those who grew up in mixed households of Native and Filipino descent. Otherwise known as Indipinos, their words lay bare their communities’ histories of traumatic assimilation as they lovingly pay tribute to their own mothers who tried to keep alive, in their own ways, their connections to their aboriginal cultures. These are all poignant testaments to the powers of remembering and recognizing."

"History is about intersections. Honor Thy Mother tells a story of intersections between Indigenous and Filipino people on one small island in Puget Sound, a story that is both transnational in scope and incredibly intimate in scale. Through moving first-person accounts of Indigenous mothers who built the Indipino community on Bainbridge, we learn about the structural forces that individuals and families negotiated and about the resilience of these women's descendants. This is a precious story and one that all who live around the shores of the Salish Sea should know."

"What a gift Honor Thy Mother is. These histories are ones that refuse to be submerged in the tempest of American and Canadian settler colonialisms, from the violence of the residential schools, to the labor regimes that mobilized thousands upon thousands across the Pacific. By setting asail stories of indigeneity and migration, this film gives new shape to the too-often land-bound narratives of Native and Asian migrant peoples in the continent now known as North America. Honor Thy Mother offers an important counterpoint to the dominant narratives of the Pacific Northwest, showcasing a community that has long flourished in spite of systemic violence across two states. Listen to these intergenerational stories, and you will be rewarded richly with a new perspective on how we got here today."

"Colonialism brought American Indians and Filipinos together - and much like how the colonial and imperialist roots of the United States are often hidden - the long, rich, and complex histories and stories of Indipinos have also been forgotten. “Honor Thy Mother” is an act of remembering; a powerful step toward healing the pains and traumas of erasure, marginalization, and invisibility. This film is a validation of Indipinos’ struggles, but it’s also a testament to their resilience. Sure, it covers intergenerational trauma, but it also conveys the potential for intergenerational healing."

"From the trauma of Indigenous boarding schools to the incarceration of Japanese Americans to the struggles of Filipino American migrant laborers, the story of the Bainbridge Island Indipino community brings together defining historical moments in transnational ethnic studies. In Honor Thy Mother, members of that community tell their own stories in a moving, artfully orchestrated collective narrative of survival, mutual support, and cultural renewal. This documentary will be a welcome addition to my college courses, and to ethnic studies classes at all academic levels that emphasize a relational approach to this continent’s interwoven histories." 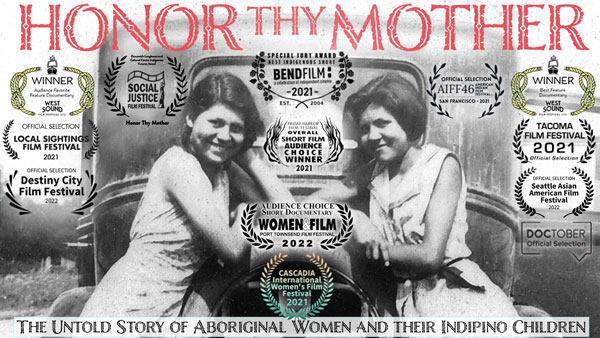 Honor Thy Mother is the untold story of 36 Aboriginal women from Canada and Native women from tribes in Washington and Alaska who migrated to Bainbridge Island, the traditional territory of the Suquamish people, in the early 1940s. They came, some still in their teens, to pick berries for Japanese American farmers.  Many, just released from the Indian residential schools, fell in love in the berry fields and married Filipino immigrants. Despite having left their homeland and possible disenfranchisement from their tribes, they settled on the Island to raise their mixed heritage (Indipino) children. The voices of the Indipino children, now elders, are integral in the storytelling of their mother’s experiences marrying Asian men and settling in a distant land. They share their confusion of growing up with no sense of belonging in either culture and raised in poverty as the children of berry farmers, some with no running water, electricity or indoor plumbing.  In a post-World War II racist environment, they grew up in homes burdened with their father and mother’s memory of the 227 Bainbridge Island Japanese Americans forcibly removed from their homes after President Franklin Roosevelt signed Executive Order 9066 on February 19th, 1942.  Brought to light, in the oral history interviews of the Indipino elders, is the effect that historical trauma has on children, more specifically children whose mothers survived Indian residential schools.

“A must-see for all preservice and in-service teachers, Honor Thy Mother – The Untold Story of Aboriginal Women and their Indipino Children, holds up a legacy that is difficult to cover and contain in just one film. With grace, strength, and profound love, they have woven a powerful path of hope and possibilities from the grandmothers, through their own life stories, and forward to the future generations. The imagery is breathtaking, the composition genius, and the storying compelling. Through telling the stories of the thirty-six Indigenous women from nineteen tribal nations who came to Bainbridge Island, land of the Suquamish, for the berry harvest, married Filipino men, and raised their Indipino children, they teach about perseverance over the debilitating effects of settler colonialism and the intense and extensive physical and cultural oppression directed at children, the Indian Residential Schools in Canada and the United States. They teach about the healing power of community, of remembering, and of recovery, as evidenced in the way that that the indipinos of Bainbridge Island see themselves as both 100% Indigenous and 100% Filipino American, with responsibility and care for two sets of cultural values and traditions. Furthermore, Honor Thy Mother serves as a research design model for culturally responsive and decolonizing studies from community or college settings.”

“This film is an absolute moving testimony of the historical trauma experienced by indigenous First Nations women matriarchs who were birthed by Filipino farm laborers and First Nations women. The term of endearment for this population of mixed racial heritage has come to be known as Indipinos, or “Indipinas.” As I watched this film, I felt strong emotions rise within me as this is also my family story as a mixed blood. I felt the healing that resonated as each elder spoke of the pain their parents went through as boarding school survivors, the targets of violent systemic institutional racism and prejudice. Their testimonies as mixed bloods tell of their painful identity crisis fueled by the extreme prejudice and hate messages that they received from the native, Filipino and white American cultures simultaneously while growing up. This film also reveals the triumph and healing that comes from bearing one’s soul through sharing the pain and the recognition of their historical truth. This is a film for the times and should be watched and should be included in Social Science, American History, and Ethnic or Native Studies school curriculum, particularly those that seek to decolonize institutional racism.”

“Honor thy Mother is a moving tribute to the many Indigenous women who labored and raised families on Bainbridge Island, Washington. The film explores how Indigenous and Asian American immigrant families forged relationships of work, love, loss, and survival. Telling the stories of the Indipino elders (Indigenous and Philipino), who were witness to the emergence of a unique Indigenous and Asian American community, is significant and necessary. Through this film, we examine how labor shapes Indigenous land and experience, and learn of the pain of discrimination within and across race. Bringing together narratives along with beautiful archival research, Honor thy Mother offers a path for all viewers to understand the complexity of Indigeneity, gender, and race through processes of colonialism, imperialism, and capitalism in both the United States and Canada. It is a remarkable documentary that demonstrates the power, too, of memory and the courage to survive, build community, and form new relationships that honor mixed heritage in the face of debilitating racism.”

“I watched Honor Thy Mother and found it compelling: infuriating and heartbreaking on the one hand, but also inspiring and uplifting on the other. I had never heard of this story before; it adds an intriguing element to the story of Japanese Americans on Bainbridge Island. I like how multi-faceted the story is and how it touches on many themes that are increasingly relevant today: how western nations have treated indigenous peoples and how we reckon with that today; what it means to be a mixed-race person and not fully accepted by either ancestral community; the importance of reclaiming one’s history and defining one’s community.”

“The impact of hearing these stories told by members of the Kitsap community is profound. Many of us read about the atrocities committed against Indigenous Peoples and may have watched a documentary or two, but Honor Thy Mother gives these stories another dimension of reality. The pain, heartbreak, and resilience of the Indipino Community of Bainbridge Island is told through the voices of those who experienced it firsthand. Poignant interviews lay bare a system of inequality and colonial ideals that has caused intergenerational trauma to Indigenous communities. Their stories are critical in the historical narrative of Kitsap County, Washington State, and the U.S. I feel that everyone should watch this film for a deeper understanding of the continued harms of colonialism and the resilience and strength of the Indipino Community.”