"A riveting story compellingly told, Honor & Sacrifice uncovers a tragedy of war—the breakup of families and the tests of conflicting loyalties.  Japanese Americans serve in the U.S. military to defend freedom while their families are interned, brothers fight in opposing armies, and the atomic bomb levels an American soldier’s family home.  There is no glory in wars."

"...an outstanding and beautifully illustrated biography..." 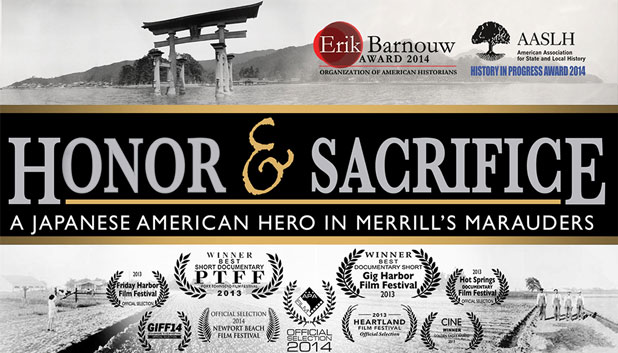 “We often uncover secrets when making films, but the revelations in this documentary astonished us. We intended to tell the story of an unlikely hero, but the production became a discovery of the suppressed struggles of three generations of a Japanese-American family from Hiroshima divided by World War II. Their journey is an embodiment of the immigrant experience, ultimately revealing the extraordinary strength that America gains from its diversity.”

In 2014, we were presented two prestigious national history awards. As far as we can tell, HONOR & SACRIFICE is the only film to ever win both awards. First, we were presented with the 2014 Erik Barnouw Award from the Organization of American Historians for outstanding programming in documentary film concerned with American history. Then we received 2014 HIP (History in Progress) Award from the American Association for State and Local History. You can read more on HONOR & SACRIFICE’s own website that includes news, screenings, reviews, press material, photos, history, and a free downloadable teaching curriculum. You can see it by clicking here.

HONOR & SACRIFICE tells the complex story of a Japanese immigrant family ripped apart by WWII. The Matsumoto family included five sons; two who fought for the Americans and three who fought for the Japanese. The eldest, Hiroshi (Roy), became a hero, fighting against the Japanese with Merrill’s Marauders, an American guerrilla unit in Burma. He was born near Los Angeles, educated in Japan, and became a hero when he used his Japanese language skills and military training to save his surrounded, starving battalion deep in the Burmese jungle. At the same time his parents and sisters were living in their family’s ancestral home, Hiroshima. The story is told by Roy’s daughter Karen as she discovers her father’s work in military intelligence, kept secret for 50 years.

April 21st, 2014, Roy Matsumoto died, surrounded by his family. The date marked 70 years after the breaking of the siege at Nphum Ga, where Roy’s actions were instrumental in saving his surrounded battalion. He will be remembered for his sacrifice and his courage for his country and his family. He will be missed by all who had the great honor of knowing him. We hope  HONOR & SACRIFICE acts as a lasting tribute to him and other Japanese Americans who bravely faced the challenges of WWII.

Includes English subtitles and closed captioning for the hearing impaired. 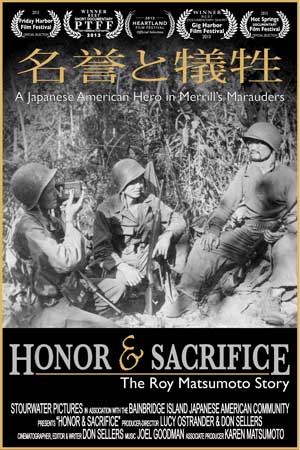 “Filmmakers Lucy Ostrander and Don Sellers’ powerful documentary tells the story of Roy Matsumoto, one of many Japanese Americans who enlisted in the U.S. military while detained in internment camps during World War II….Decorated for heroism, Matsumoto was eventually sent to postwar Japan, where he found relatives still alive in Hiroshima despite the nuclear bomb attack that had devastated the city. Interweaving archival footage and family photographs to illustrate this compelling story, along with an interview of the elderly Matsumoto, Honor & Sacrifice underscores the many internal conflicts and ironies experienced by Japanese-American enlistees, from having to prove their loyalty while confined within the U.S. to fighting an enemy that often (as in Matsumoto’s case) literally included one’s brothers from the old country. Highly recommended.”